It had been raining for almost two weeks when the forecast finally showed a brief window of clear skies. It was time to pack up and head out for one last trip in 2021.

My destination was my go-to winter backpacking spot near home, Henry Coe. Less than an hour from San Jose, it offers unbeatable solitude and great views.

I had planned a route well in advance, waiting for the rain to ease up. The plan was to go on a moderately challenging overnight trip to the eastern part of the park.

I would start at Hunting Hollow trailhead head to Mississippi Lake via Kelly Lake and Pacheco Camp. Then, on the way back, I follow Willow Ridge down to Coyote Creek before turning south and back to the trailhead following Mahoney Meadows Road and Coit Road.

Day 1: to Mississippi Lake via Kelly Lake and Pacheco Camp

A dense morning fog covered the parking lot. I paid for parking, got my gear in order, and headed out.

Debris and wilted grass along Hunting Hollow indicated that the water had been several feet higher just days ago. I waded through the shin-deep freezing water and took the first trail towards Steer Ridge.

After a few minutes, I was above the fog with a clear blue sky and a chilly morning wind. The initial climb from the trailhead is a sweaty ordeal: 1,800 feet in less than 3 miles. But it's worth it. As I got higher, I had expansive views of the peaks and valleys I'd be spending the next two days exploring.

After summiting Willson Peak, I turned north and began descending into Grizzly Gulch and the fog. Long strands of Spanish moss were hanging from the trees along the creek, dripping water on me as I passed under them.

I took a faint trail that followed a seasonal stream, passing through mossy rocks and low-hanging oak trees up to Dexter Trail from Grizzly Gulch.

I entered the 2020 SCU fire burn area as I turned towards Kelly Lake from Wasno Road. The green undergrowth was in stark contrast to the charred trees. Some trees seemed unscathed even though the trees next to them were completely burned down.

From Kelly Lake, I followed Coit Road past Pacheco Camp. The stables at Pacheco Camp had burned down since my last visit, but the rest of the structures were remarkably still standing. I waded over Pacheco Creek and continued east toward County Line Road.

County Line Road offered spectacular views of the easter parts of the park. I could see all the way to the snow-capped  Sierra Nevada mountains on the other side of Central Valley.

I arrived at Mississippi Lake well before sunset. I spent almost half an hour walking around the lake to find a good campsite, eventually setting up my tent on the dam even though I knew it would get cold and damp that close to the water. It might have been better to fill up on water and dry camp farther up.

The temperature quickly dropped 10 degrees after the sun dipped below the horizon. I ate a hearty bowl of spicy noodle soup and then retreated to the warmth of my quilt for the rest of the evening.

Day 2: back to Hunting Hollow via Willow Ridge and Coit Road

I woke up to a frozen tent. As I had expected, the combination of a lake-level site with no cover had resulted in a damp night. Fortunately, my stuff had stayed dry, and my quilt had kept the moisture out even though the foot box had rubbed up against the wet tent.

I made breakfast as I watched a dense fog roll in over the lake. It was still cold, and the sun hadn't hit the tent, so I took my time enjoying the warm morning coffee in the comfort of my quilt.

After scraping all the ice off my tent and packing up my stuff, it was time to head out. The fog had lifted and the sun warmed my face as I walked out of camp.

I quickly caught up with the fog as I began climbing up Willow Ridge Road, pushing above it for some spectacular views. The green hills were like islands in the sea of morning fog below.

Willow Ridge Road passes through chaparral on both sides. Occasionally, the fire had burned openings in the dense bushes that revealed even more expansive views. After a couple of miles, I left the road and headed down Willow Ridge Trail to Los Cruzeros along Coyote Creek for a coffee and snack break.

I filled up on water and began the last climb of the day. Although only 800 feet, the climb got very sweaty. The steep incline had been trampled into soft mud by cows in many places, slowing me down.

Finally, the road crossed open meadows at the top as it slowly descended toward Coit Horse camp. I saw a group of mountain bikers just past the horse camp, the first people I'd seen in over 30 hours. Remarkably, you can go for over a day without seeing another person while still in the 6th most populous county in the country, with almost 2 million inhabitants.

The last stretch of the hike is a road walk along the paved Gilroy Hot Springs road. There's very little traffic on the road, so it still felt almost like being in nature.

On this section hike of the Yosemite High Route, we got to see rarely visited parts of the park and explore the spectacular high sierra landscape.

I thru-hiked the TRT in June after a low snow winter. An early summer trip meant bright greens, tons of wildflowers, and easier access to water. What a trip! 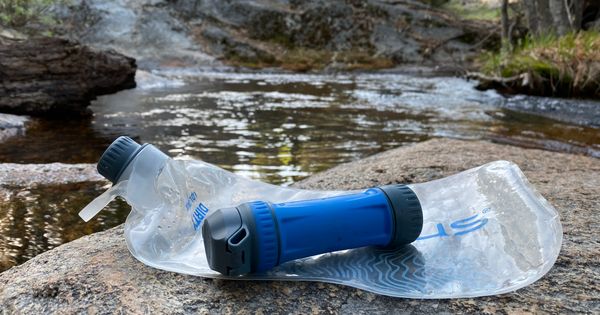 Platypus QuickDraw offers a stunning flow rate, thought-out features like a flip-top and bottom cap. But it has a big design flaw that may be a deal-breaker.